The following interview was held on November 29th, 2018:

Hello Peter, you are one of the most productive musicians in Germany, you seem to publish CDs and books outright one after the other. What's new from you?

My solo CD "Begin At The End" has been released in Japan this year and I'm glad that it is received very well by the press and listeners. My contact to the Far East came about via YouTube. As the videos can be accessed worldwide I had the first invitation for concerts in Tokyo and Sapporo in 2014. Thanks to Mr. Fujii and his wife from Tokyo. During the trip to Japan, I learned that I have even more fans in Tokyo. The DoNichi Café in the Nakano district has been playing my music exclusively for five years. I did not even know that there are so many hours of recordings of my compositions, the music is looping there and since the program is so long, people in the café will not be bored. It's a matter of thankfulness that I immediately send every new production to DoNichi Café. During my last trip to Japan, I came up with the idea to maybe release a CD there. I introduced myself to the label Da Vinci in Osaka and we started to work together.

Did you record everything in one go on the Japanese album or did you have overdubs with multi-track method?

I wanted an honest, unvarnished image of the current state of my playing, my goal was pure jazz, so I recorded everything with only one guitar and you can hear just the 17 "archtop that Joe Striebel built for me in 2007. This fabulous instrument does everything for me and I'm happy every time I play it. Every now and then I tried an alternative version of a song while recording, but mostly the first take was chosen. It may not be perfect, but the music is fresh and inspired.

Is this your return to jazz?

That's a good question. 20 years ago you could scare off people by calling yourself a jazz guitarist. My music has always included jazz, but it was important not to overemphasize that. Because the effects of the free-jazz era were still present and jazz had a bad reputation. That has changed and today I can say without blushing: Yes, I'm a jazz guitarist.

But you should not forget that you worked as a professional rock guitarist for a long time and have also participated in many musicals.

The rock opera "The Who's Tommy" or the Queen show "We Will Rock You" both were about portraying the style of famous guitar heroes Pete Townshend and Brian May, and this had to be done as accurately as possible. I must be good at that, that's why I've been working there. But it was a service, not more. During that time I recorded a lot of Autschbach originals, having released about a new album every two years and since 2008, my business runs without any musical service for somebody else's shows. Being able to make a living playing my own music is a true privilege and it makes me happy to have achieved that.

You play with Ralf Illenberger in a duo. Is this jazz?

Only a very small part of it. We improvise a lot, but this is not Jazz. The music is rather folk and fingerpicking, I adjusted myself to Ralf in this duo, on his side of the fence we can play very well together. So it's Illenberger music with Autschbach influences. We have played hundreds of concerts and released three albums with our own pieces, and we have always been equally involved in the composition process. When I write for this duo, I write for Ralf's style of playing, which I know and appreciate very well since his time in the duo Kolbe-Illenberger (around 1980).

And now there is also a completely new project with female singer Samira Saygili?

This is not new, we have been doing concerts since 2009. And all the time there was the desire to make a joint production. That did not work for many reasons, but in 2018 it was about time, the album "Sweeter Than Honey" was released on November 9th. The first reactions are very encouraging. Samira and I composed half of the pieces ourselves, the rest consists of very personal versions of famous songs.

Composition plays a big role in your work...

Yes, a lot of my work is composing. When I write, I always have the goal in mind. For example, I imagine my band Terminal A on stage. With everything, big audience, light show, great sound. And then music comes to my mind, which I then try to capture. I usually do that by sketching what I hear inside, just with my voice. Only after this do I take the guitar and work it out. This is a very intimate, personal approach. What comes out usually makes me more satisfied than when I use an instrument to compose, but that happens as well. When composing, I do not care about genres and styles like jazz, blues, rock, latin american music or fingerstyle. Elements of these styles are clearly part of my music, but I try to incorporate surprises again and again. This can be subtle modulations (which harmony teaches me) or rhythm breaks, then the colors change. With surprises you entertain your audience. Singable melodies are very important to me, because they are the bridge to the people. I want them to be able to understand and enjoy my music although they might not be music experts. Jazz critics sometimes take this amiss, they do not like jazz musicians who want to entertain their audience. But that's exactly what I wanted from the beginning. Because when the music entertains people, it also entertains me.

Your versions of well-known songs like "Your Song" by Elton John or "You've Got A Friend" by Carol King have been treated respectfully by you, but you've changed a lot anyway.

Simply covering songs as they are would not feel satisfying to me. I love chords and the musical colors that you can create with them. That's why - through reharmonization and also new rhythms - I want to incorporate well-known melodies that I like into the style that is recognizable in my own compositions. It's not about "doing things differently" at any cost, but I think if you cover a song, then your own personality should be included as well. Exactly that is not allowed when working for rock operas and musicals, because you have to just do what you're supposed to do and this is sounding like "they" want you to sound like. I am very happy that I can now play the way I feel, without the need of asking anybody else.

Let's talk about the educator Autschbach. You have a lot of students, right?

Yes, since 1990 I am employed at the Music School Lennestadt. Since 2003, however, I mainly teach workshops that vary from a timeframe of several hours to two weeks. I have an average of 15 people joining these events and there I can pass on my knowledge much more effectively than in one-to-one lessons. I love to meet new people and work with them. I have met many of my friends on such occasions.

Where do these events take place?

Everywhere where my help might be needed. There are one-day or weekend events, which take place all over Germany. I conduct three one-week workshops per year in Tuscany, Italy, through the Mediterranean Music School. Every two years I organize a long-distance travel workshop, we have been to Mauritius, the Maldives, La Réunion, the Seychelles and Rodrigues. But then we go two weeks to make the trip worthwhile.

Do you play guitar in the Indian Ocean all day long?

For God's sake, no. In contrast to the Tuscany workshops, where there are four hours of lessons a day plus jam sessions, we take it easy in the tropics. This is more like a holiday with guitar playing friends.

Yes, at first glance it all seems very chilling and desirable, but there is also a lot of work behind it. I gained my reputation as a guitar teacher writing sixteen guitar teaching books. In addition, I regularly write columns in guitar magazines such as "Acoustic Player", which also brings new workshop participants time and again.

Do you develop the books completely alone, with layout and everything?

Oh no, this would be impossible. Luckily there are publishers: Acoustic Music Books, Fingerprint and Schott Music are working closely with me. I let my ideas be transcribed by Richard Müller and I correct any mistakes that do not necessarily have to be his mistakes, because often a notation develops over several weeks. After that, the transcriptions go to editorial. The finished sheet music will then be given to graphic artist and illustrator Selina Peterson. She makes the layout and develops the cover. At my two-volume children's guitar school "Learning Guitar with Zacky and Bob" (Schott Music), she also developed the characters Zacky and Bob and she illustrated both books beautifully. Selina also illustrates for other authors and publishers, no wonder, she is absolutely great. Since 2011 she also creates all my CD covers and she developed the web layout of my homepage.

During my studies at the Musikhochschule in Cologne, I saved every penny to afford my dreamrig. It consisted of the best tube preamplifiers and a tube power amp with effects units in between. The rack had 14 height units and I transported this refrigerator-size monster across the republic. What a miserable job to carry this stuff around. Since 2008 I play the Axe-Fx by Fractal Audio. I've actively used it at all stages of its development, and my YouTube videos on fractal equipment have been viewed thousands of times. Of course I now own the current Ax-Fx III. This fulfills all my sound wishes without any compromises, thus measuring only three height units. I play acoustic and electric guitars and the sound is always awesome. I feed the sound in active AER acousticube amps plus AER subwoofers.

Which guitars do you use?

My favorite luthier is Johannes Striebel from Wolfratshausen, he has built almost all of my guitars. Joe knows what I want and he is the best. My favorite guitar is now his nylon cutaway, designed especially for me, with a hexaphonic RMC pickup. I do not want to put it out of my hands anymore. But I would also like to mention Peter Finger, who built me ​​a great sounding Steelstring.

Which strings do you use?

On the nylon string I play D'Addario XT, they are simply great. My steel strings also come from D'Addario, 012 to 053, bronze, coated.

Thank you for the interview! 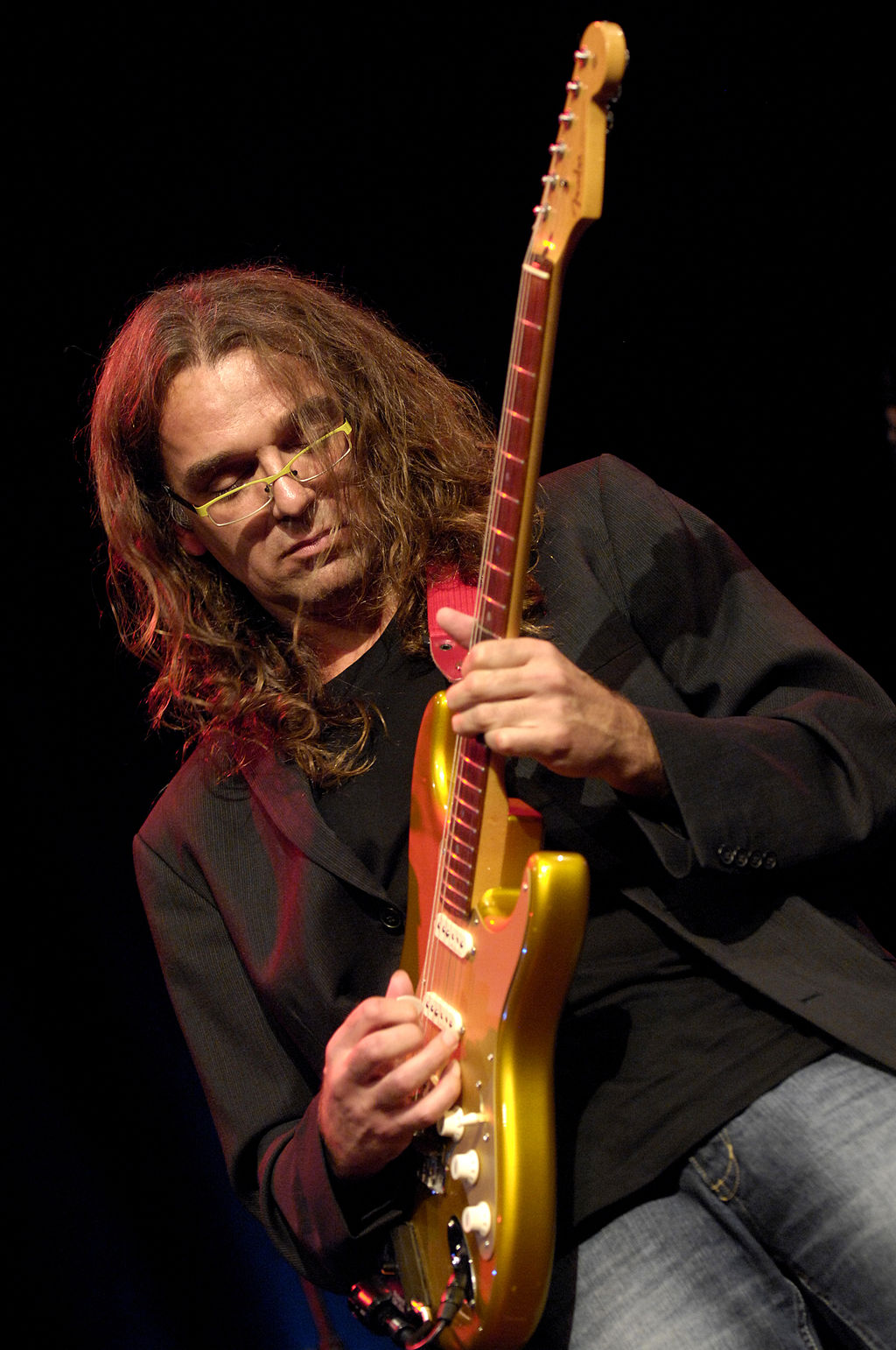